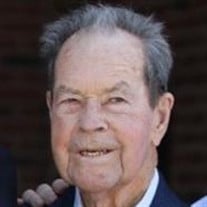 Charles Ray Cowart, a life-long resident of Hardee County, passed away peacefully at home surrounded by his family on October 21, 2021, and entered the presence of his Lord and Savior. He was born on November 21, 1933, to Boyd and Mada Cowart of the Lake Dale community. He graduated from Hardee County High School in 1951 and the University of Florida in 1955 with a degree in animal husbandry. While there he was a member of the Alpha Gamma Rho fraternity, the Alpha Zeta Society, and the Scabbard and Blade Society. Following college, Charles Ray served as a First Lieutenant in the United States Army. He returned to Hardee County to a life of farming and ranching, and to marry his childhood sweetheart, Mary Jean Griffin. They raised four children in a Christian home. Charles Ray will always be remembered for his hard work and his love and devotion to family, church, and community. He was honest in all aspects of business and life and believed that a man’s word and handshake were more significant than any contract. More important than anything in his life was his love of God and the Word of God. He looked for the good in people and forgave all, loving his neighbor as himself. Charles Ray served as a deacon of Lake Dale Baptist Church and later New Hope Baptist Church, tirelessly devoting his time and efforts to furthering the Kingdom of God. He kept active in church work for as long as his health allowed. His final years saw him completely immersed in the scriptures and in prayer. Charles Ray was preceded in death by his wife of 54 years, Mary Jean, his daughter, Linda Gayle, parents Lewis Boyd and Mada Alene Phillips Cowart, brother Ronald B. Cowart, and sister Mary Frances Walton. He is survived by sons Charles Thomas (Ilona) Cowart of Wauchula, Dennis R. Cowart of Boca Raton, and J. Bruce Cowart of Fort Lauderdale. He also leaves behind three grandchildren, Charles N. Cowart, Sarah (Jonathan) Stephens, and Amanda (Bryan) Cook, four great-grandchildren, and many nieces and nephews that he dearly loved. Funeral services celebrating his life will be held at New Hope Baptist Church on Saturday, October 30th at 11:00 AM with visitation at 10:00.

Charles Ray Cowart, a life-long resident of Hardee County, passed away peacefully at home surrounded by his family on October 21, 2021, and entered the presence of his Lord and Savior. He was born on November 21, 1933, to Boyd and Mada Cowart... View Obituary & Service Information

The family of Charles Ray Cowart created this Life Tributes page to make it easy to share your memories.

Send flowers to the Cowart family.