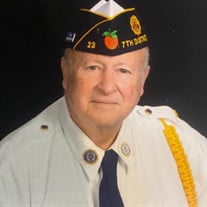 Charles Edgar Perry, 75, went to his heavenly home on Saturday, July 17, in Bartow, Florida. Charlie was born August 15, 1945, in Bartow, and was the son of the late Thomas Edgar and Eunice Minor Perry of Fort Meade and the brother of Winifred Perry Fort (Royal), who also predeceased him. He grew up and attended school in Jacksonville but visited his grandparents and extended family in Fort Meade during summers and holidays. He knew when he retired from AT&T as a power installer he would make the family farm his home, which he did in 2001. Charlie loved his family, his country, and his God. Surviving is his wife of 37 years, Priscilla White Perry, and his “instant family,” whom he loved and cared for, including Angela Fowler Martin (Mark) and children Aerial Martin Henry and Eric Martin (Heather); James Ward Fowler (Denise) and son Cody: John Allen Fowler (Krystal) and daughter Kayla, all of Blacksburg, South Carolina; and Erin Scarlette Blackwelder Herlburt (Adam) of Jacksonville, and sons David McGinnis (Sarah) of Lake Wales, Brett Cerrone of Eglin AFB, Ethan McGinnis of Fort Meade, and Jacob Britt of Jacksonville; and seven great-grandchildren; neighbor, friend, and only first cousin, Tom Perry (Sharan) of Fort Meade, and extended family members. Charlie graduated from Florida Military Academy in Sanford and then enlisted in the U.S. Navy, serving on the USS Scarsfield as a radioman. He remained a proud Tin Can Sailor veteran. He was current commander of American Legion Post 23 in Fort Meade. His love of the sea evolved into sailing his beloved “Vitamin C” Catalina 25. Anyone who knew Charlie knew he was a faithful Christian. A lifelong Methodist, he belonged to the Bowling Green Methodist Church, where generations of his family had attended and had just recently joined the First United Methodist Church of Fort Meade. He was also a member of the R.O.M.E.O Club (Retired Old Men Eating Out) who gathered throughout the years in the mornings at local restaurants to gossip, solve the problems of the world, and sometimes eat breakfast. Celebration of Life will be held at the First United Methodist Church of Fort Meade on Wednesday, July 21, at 11 a.m. Officiated by Pastor Bill Baldwin, Mr. Connally Barnett, and Mr. Wayne Fulford with the Men’s Sunday School Class and Post 23 of the American Legion as honorary pallbearers. Robarts Family Funeral Home, 529 W. Main Street, Wauchula handled the arrangements. In lieu of flowers, donations may be made to the First United Methodist Church of Fort Meade or American Legion Post 23.

Charles Edgar Perry, 75, went to his heavenly home on Saturday, July 17, in Bartow, Florida. Charlie was born August 15, 1945, in Bartow, and was the son of the late Thomas Edgar and Eunice Minor Perry of Fort Meade and the brother... View Obituary & Service Information

The family of Charles Edgar Perry created this Life Tributes page to make it easy to share your memories.

Charles Edgar Perry, 75, went to his heavenly home on Saturday,...

Send flowers to the Perry family.