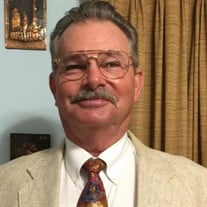 David Scott Henderson, age 69, resided in Wauchula, FL. David was born in Tampa, FL in 1952 to Pete and Susie Henderson, and was the second of their five sons. Tragically, David left this life on Friday, April 1st, 2022. David is survived by his loving wife, Elsona; his only daughter, Charis; 3 grandsons, Blaine, Eli and Seth; a great-granddaughter, Anna; 4 brothers, Doug, Dale, Dana, and Duane; many nephews, nieces, cousins, and a multitude of friends. David was a graduate of Southeast High School in Bradenton, FL. He followed in his father’s footsteps and, in keeping with family tradition, David enlisted in the U.S. Army in the Helicopter Pilot Program. He obtained and maintained both Fixed Wing and Rotary Wing pilot’s licenses. David was an accomplished bassist musician as well as a top-notch ironworker, both of which were his early careers. Again, following suit with family tradition, David entered into law enforcement and security. He obtained and held the highest U.S. security clearance possible which he used in his worldwide career for the last 3+ decades, traveling to no less than 20 countries around the world. Through all this, family traditions remained his hope and another was that of becoming a Mason. That process began on Feb 22, 1999. Ultimately, he became a Master Mason on Mar 14, 2000. He had many further interests and hobbies; and was an astute researcher of world events and politics, and an avid follower of military history. David and Elsona shared a love of rural life together with their closest family and friends along with their favorite Bull Terriers. His love towards Elsona could often be seen in care packages arriving in Albania for family members that remain there. His goodness, work ethic, and ability to adapt to any situation created friendships and the impact that crossed many continents. Services will be at New Hope Baptist Church in Wauchula, FL on Monday, April 11, 2022. Public visitation – 10:00 am Service – 11:00 am with graveside procession immediately following service. Pastor Joel Tillis and Pastor Kevin Roberts will be officiating services. In lieu of flowers, help others of your choosing in honor of his name.

David Scott Henderson, age 69, resided in Wauchula, FL. David was born in Tampa, FL in 1952 to Pete and Susie Henderson, and was the second of their five sons. Tragically, David left this life on Friday, April 1st, 2022. David is survived by... View Obituary & Service Information

The family of David Scott Henderson created this Life Tributes page to make it easy to share your memories.

Send flowers to the Henderson family.