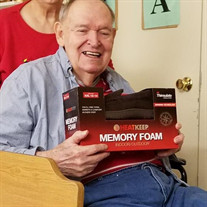 Donovan Earl Thompson, 83, of Wauchula, passed away on Wednesday, May 8, 2019 at Hardee Manor. He was born in Westfield, Illinois on January 7, 1936 and had been a Hardee County resident since 1992 when he moved from Indianapolis, Indiana.... View Obituary & Service Information

The family of Donovan Earl Thompson created this Life Tributes page to make it easy to share your memories.

Donovan Earl Thompson, 83, of Wauchula, passed away on Wednesday,...

Send flowers to the Thompson family.