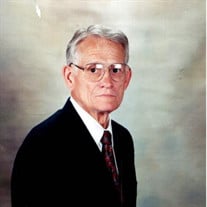 Dr. Ernest P. Palmer, died peacefully with his family by his side May 7, 2018. He was 86. Dr. Palmer was born in Memphis, Tennessee. He was a graduate of Memphis State University, Western Reserve University and the University of Tennessee Medical School. His post-graduate work included a Fellowship in Pathology (University of Tennessee), Rotating Internship (Charity Hospital, New Orleans), OB-GYN Residency (Southern Baptist Hospital, New Orleans), General Practice (New Orleans), General Surgery Residence (Veterans Administration Hospital and Variety Children's Hospital, Miami, Fl). After completing his education and training, Dr. Palmer began searching for a small clinic-hospital where he could have close access to his patients during their treatment and hospitalization. He found what he was looking for in Wauchula, and for the next 42 years he served this area through his medical practice. He served as Chief of Staff at Hardee Memorial Hospital and as Medical Director for Hardee Manor, Desoto Health and Rehab and the Hardee Correctional Institution. Dr. Palmer was a dedicated member of the First Baptist Church, serving as a Deacon and as a medical missionary in Brazil and New Guinea. Dr. Palmer was involved with Hardee County Athletics for many years. In 1965, he became the side-line doctor for the Hardee Wildcats, serving for the next 13 years. In 1970, Dr. Palmer unofficially started Hardee Youth Football by bringing kids home after school to practice, serving as the president of the league from 1971-1984. During his military service, he boxed his way to the Keesler Air Force Base Championship in 1952. Palmer had several hobbies and pursued them with passion. He enjoyed running and completed several marathons, including the Boston Marathon. He loved salt water and scuba diving, becoming a certified Master Scuba Diver. He also obtained his pilot's license and enjoyed flying small aircraft. Dr. Palmer is survived by his wife of 62 years, Gayle M. Palmer, four children, Lisa Dickerson, Leigh (Joe) Lamonica, Steve (Jennifer) Palmer and West (Laina) Palmer; ten grandchildren, Katie, Jaime, Weston, Savanah, Kelly, Kelsey, Summer, Luke, Ellie and Sam; and two great grandchildren, Reese and Palmer Grace. He was preceded in death by his parents Ernest P. Palmer and Lucile Glanville and son-in-law Larry Dickerson. His family will be forever grateful for the excellent care he received from the wonderful nurses and staff at Florida Hospital Wauchula, many of whom had worked together with him in the past. A special thank you to Senator Denise Grimsley and Dr. Kathy H. Lee for their compassion and expertise. A graveside service will be held on Thursday, May 10, 2018 at 10:00 a.m. at the Wauchula Cemetery. The greatest among you will be your servant. Matthew 23:11.

Dr. Ernest P. Palmer, died peacefully with his family by his side May 7, 2018. He was 86. Dr. Palmer was born in Memphis, Tennessee. He was a graduate of Memphis State University, Western Reserve University and the University of Tennessee... View Obituary & Service Information

The family of Dr. Ernest P. Palmer created this Life Tributes page to make it easy to share your memories.

Dr. Ernest P. Palmer, died peacefully with his family by his...

Send flowers to the Palmer family.