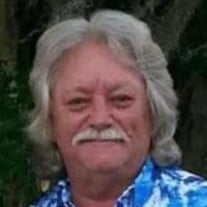 GEORGE NELSON LACKEY, SR, Born in Meridian, MS on April 14, 1957, had his “One Fine Day” on August 21, 2020 in Amarillo, TX. The older of two children, he lived a short time in MS & AL before moving to Wauchula, FL in the sixth grade. Nelson never met a stranger, he made an impression on everyone he met, he would help you in any way he could, he would give you the shirt off his back even if he had no shirt. He was the ultimate dreamer, he spoke his mind, stood by his beliefs, and was a passionate loving man. His relationship with Christ was #1 in his life. He truly had a servant’s heart. Nelson attended First Baptist Church of Wauchula with his family, and now attends Real Life Church in Bowling Green, FL. While in school, he enjoyed playing football (against his parents’ advice), where he excelled. He also loved playing golf all through high school and his early adult life, where he also excelled. Nelson was at the College & Career class at church, when he met his future wife (Melinda) in May of 1980. When he met her, he called his mom and asked who she was and how to contact her! Three months later they were married. At that time Nelson was working with Turkey Point Nuclear Plant. They settled in Wauchula, and he began working for Mobil Chemical Co. At that time, they started a family in ’82. Soon after a back injury, he sold Motor Manuals for Bruce Garger. His next endeavor was managing the family Radio Shack with his dad. After selling the business, he helped manage Auto Zone. He found an opportunity doing what he loved, and he became a professional oversized load escort driver. In doing this he met so many people that became a brotherhood of friends. Nelson knew and helped so many people that even his family did not know. His spirit and legacy will live in our hearts forever. He was preceded in death by his parents, George and Magdalene “Madge” Lackey. Survivors include his loving wife, Melinda Lackey of Bowling Green, Fl; son, George Nelson Lackey Jr. (Allison Judah) of Bowling Green, Fl; daughters, Melina Washington (Jay) of Sebring, Fl; Whitney Lackey (Anthony) of Newberg, Oregon; sister, Karin Lackey (Shelli) of Washington, grandchildren, Elijah Leon Hart, EraNell Grace Molina and Harmony Faith Molina; nieces, Tiana Wise, Katrinna Quackenbush, Emily Lackey and nephew, Riley Lackey . For reasons of social distancing the visitation will be from 3:00 pm – 4:00 pm on Friday, August 28, 2020 in the Robarts Garden Chapel. The funeral service will be private and the family requests masks be worn. The service will be live-streamed on Facebook. Mr. Gary Moore and Mr. Jed Drake will be officiating. Interment will take place at Wauchula Cemetery.

The family of George Nelson Lackey Sr created this Life Tributes page to make it easy to share your memories.

Send flowers to the Lackey family.