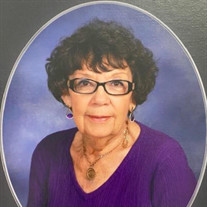 Gloria A Harrod 84, went home to her Heavenly Father and Savior, November 6, 2021. She was born on October 29, 1937, in Des Moines, Iowa to Donald Reinhard and Louise (Hazen) Davis. Her family moved to California 3 months later, then at 8 yrs old her family moved to Miami, Florida where she grew up. She attended FSU. While attending a dance she met her future husband Andrew Harrod (Navy). They eloped a little time later and were married for 56 years. Being married to Andy was an adventure and they lived in several different states and back to Miami. In the late 1980's they moved here to Hardee County where she worked at PRECO, Scotty's Hardware, and Hash Plumbing, INC. Everywhere she worked she developed lifelong friendships. She attended First United Methodist Church in Zolfo Springs and then Sunday evenings at the First Baptist Church of Zolfo Springs. She is survived by her brother James Davis of Bethel Springs, Tn., James's children Greg J. Davis, Adrienne "Jody" Davis Riggs, April B. Davis Milton; his 10 grandchildren, and his 20 great-grandchildren. Also many nieces and nephews on Andy's side of the family. She was preceded in death by her husband Andy, her parents, Louise and Hazen Davis, Father Donald Reinhard, and her niece Amber Davis Kenyon. As she crossed that rainbow bridge she had to have been greeted by many four-legged 'critters' that she loved and took care of. Her beloved Teddy ( A Pomeranian) was leading the group. Thank you for celebrating the amazing life of this wonderful woman. Wherever she went she brought smiles and laughter. One thing she really enjoyed was line dancing and I am sure she is in heaven doing the Boot Scooting Bogie with family and friends. Cremation was selected. A memorial service will be held on December 11th at 11 AM at the First United Methodist Church of Zolfo Springs. In lieu of flowers a donation to HART (Hardee Animal Rescue Team, Inc.) 328 N. 4th Ave. Wauchula, Fl. 33873 or to First United Methodist Church of Zolfo Springs 3402 Suwanee St. Zolfo Springs, Fl. 33890

Gloria A Harrod 84, went home to her Heavenly Father and Savior, November 6, 2021. She was born on October 29, 1937, in Des Moines, Iowa to Donald Reinhard and Louise (Hazen) Davis. Her family moved to California 3 months later, then at 8 yrs... View Obituary & Service Information

The family of Gloria A Harrod created this Life Tributes page to make it easy to share your memories.

Gloria A Harrod 84, went home to her Heavenly Father and Savior,...

Send flowers to the Harrod family.