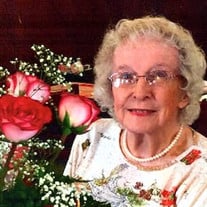 Grace M. Emmerton passed away on December 14, 2018 after a long life of 90 years. She was born in Summerville, Mass. To Herbert J. and Florence Lockhart, their only child. She grew up in Stoneham, Massachusetts where she met, at the age of 16, her love for life, George M. Emmerton, with whom she was married from 1949 to 2006, when he passed. Together they raised four children, Bruce, Scott, Marsha and Dundee. Grace worked as a teacher briefly, prior to her marriage. She returned to employment in 1966 and worked in a variety of municipal occupations ranging from Secretary for the Selectman in New London, NH, to property appraiser, tax assessor and Town Manager of So. Paris, Maine, the position for which she retired, for the first time, when she and George moved to Florida in 1992. After moving to Wauchula, Florida, she worked for the Chamber of Commerce and then as a Receptionist at Wauchula State bank, a position she held for 24 years, until the age of 88, when she retired for the last time due to accumulating health concerns. Grace had a knack for remembering people, their spouses or significant others, their parents or children and even the names of their pets. As a result, she made friends very easily and frequently amazed people with the breadth of her knowledge. She had a great love of history, especially British History and could name all the Kings and Queens of England upon request. I will concede she did not get a lot of requests but could do it, if asked. Grace is survived by her children, Bruce & Robin Emmerton, Scott Emmerton, and Dundee Pratt and her partner Peter, her grandchildren Paul Farley III and his sister Bridget, her granddaughter Riann and Michael Chrimes and their son Christopher, grandson Mathias and & Amanda Emmerton, and their children Riley and Emily She is preceded by daughter Marsha Emmerton and husband George Emmerton. To say she will be missed is to understate the case.

Grace M. Emmerton passed away on December 14, 2018 after a long life of 90 years. She was born in Summerville, Mass. To Herbert J. and Florence Lockhart, their only child. She grew up in Stoneham, Massachusetts where she met, at the age of 16,... View Obituary & Service Information

The family of Grace Myrtle Emmerton created this Life Tributes page to make it easy to share your memories.

Send flowers to the Emmerton family.