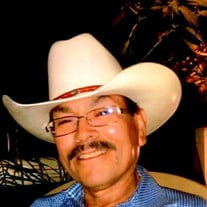 Guadalupe "Wally" Guerrero, 61, of Wauchula, Florida, passed away at AdventHealth in Sebring on Thursday, March 25, 2021. He was born in McKinney, Texas on September 26, 1959. Wally had lived in Hardee County most of his life. He attended... View Obituary & Service Information

The family of Guadalupe "Wally" Guerrero created this Life Tributes page to make it easy to share your memories.

Send flowers to the Guerrero family.