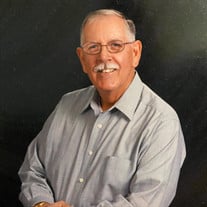 James Nicholas Johnson, age 67, passed away unexpectedly on Monday, September 27, 2021. Nick, as his family and friends called him, was a native-born Floridian who was devoted to God, his family, and his friends. He never met a stranger. He lived an adventurous life that allowed him to call beautiful places like Florida, New Mexico, California, and Grand Bahama Island his home. At the age of 17, he enlisted in The United States Army, as a Medic in the 197th Infantry Battalion where he was stationed at Fort Sam Houston, Fort Benning, and Fort Jackson. After separating from the Army, he settled in Florida to be near his family. In 1984, he met his beautiful wife, Cindy. Together, they had four children. Nick worked for Mosaic for 41 years, finally retiring in 2018. When he wasn’t coaching football, spending time with this family, or eating fried chicken at Double J’s, he loved to play softball, basketball, visit people at church, play golf, saltwater fish, and cast net for mullet. His most favorite activities were telling people about the good news of Jesus Christ and spending time in the outdoors hunting for deer and his favorite wild game, the Osceola turkey. Those who were close to him knew he was one of the most compassionate, caring, outspoken, and loyal humans a person could ever meet. He was a good and faithful servant. One little-known fact about Nick is he loved to write poems for his family. Perhaps one of his most “famous” poems was titled “Do You Have One of Those?” Feel free to ask any of his grandchildren who will happily recite it for your listening pleasure. His talent was not limited to writing poetry as he could turn any funny situation into a song. He loved to make people laugh. He was preceded in death by his mother Laverne Cribbs, older brother Ricky Johnson, younger brother Jeff Johnson, father and mother-in-law Ray & Belle Brobst. He is survived by his wife Cindy Johnson, father Buck Johnson, children Chris (Selina) Salter, Stacy (Seth) Pascarella, Angela (Dale) Roberts, and Nicholas (Stephanie) Salter. His grandchildren, Christina, Jarrett, Karley, Dean, Josalyn, Austin, Clay, Tina, Kristin, Stevie, Ethan, Maddie, Colby, and Frank, his two great-grandchildren Val and Kason. His younger siblings Tracy (Jim) Wells, Jeffrey Johnson, and Shane Johnson. To Nick, family was not only made up of those related by blood. He was blessed to have devoted friends who he thought of as his brothers and always considered himself an Adams by default. To know Nick was to love him. What he leaves behind is a legacy that will be kept alive by everyone he knew. Services will be held at First Baptist Church of Bowling Green, FL at 11 am on Wednesday, September 29, 2021. In lieu of flowers, donations can be made to the First Baptist Church of Bowling Green, Florida.

James Nicholas Johnson, age 67, passed away unexpectedly on Monday, September 27, 2021. Nick, as his family and friends called him, was a native-born Floridian who was devoted to God, his family, and his friends. He never met a stranger. He... View Obituary & Service Information

The family of James Nicholas Johnson created this Life Tributes page to make it easy to share your memories.

Send flowers to the Johnson family.