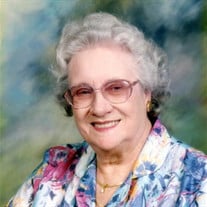 Joan Hindley Tayntor August 29, 1923 - September 3, 2018 Joan Hindley Tayntor, of Wauchula, passed away September 3, 2018. She had been living in Tampa, near her daughter, for the past 5 years and recently celebrated her 95th birthday. Born in Manchester, England, Joan served in the Women’s Auxiliary Air Force during World War II, working as a teletype operator. She met her future husband, Frank Wesley Tayntor, in England in 1950. She emigrated to the United States in 1953 and married Frank on June 21, 1954. Frank, a jet engine consultant for General Electric, was assigned to work with US and foreign militaries throughout the world, sometimes accompanied by Joan and their two daughters. The family lived briefly in Turkey and Norway and later spent seven years in Japan, where Joan was a Girl Scout Leader and took up both silk and oil painting. Joan enjoyed traveling with her husband. In 1967, while living in Japan, they put the girls on a plane to Canada to stay with her brother’s family, then took off on a six-week trip around the world. When Frank retired in 1971, the family left Japan, sailing across the Sea of Japan to the USSR where they traveled on the Trans-Siberian Railway across the Soviet Union and continued by rail through Europe and on to England. Frank and Joan retired to the home and grove they had purchased in 1957 and became active members of the Wauchula United Methodist Church. Joan was involved in the church’s women’s groups and enjoyed creating items for the annual Holiday Bazaar and helping with various outreach programs. Joan was preceded in death by her husband in 1987. She is survived by two daughters, Jan Schultz (Fred) and Trish Strat (Tom), four grandchildren and two great-grandchildren. A memorial service is being planned for October. Memorial contributions may be made to your local Special Olympics.

The family of Joan Hindley Tayntor created this Life Tributes page to make it easy to share your memories.

Send flowers to the Tayntor family.