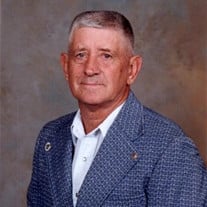 Karl Framer, 86, of Hardee County, passed away in Sebring, on January 6, 2019. Karl was born in Somerspoint, New Jersey and had been a resident of Hardee County since 1979, coming from New Jersey. He proudly served in the United States Army.... View Obituary & Service Information

The family of Karl Winfield Framer Sr. created this Life Tributes page to make it easy to share your memories.

Karl Framer, 86, of Hardee County, passed away in Sebring, on...

Send flowers to the Framer family.