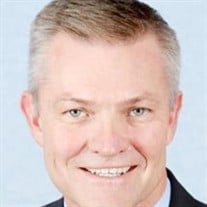 Kenneth (Ken or Kenny) Allen Lambert passed away peacefully at his home on Sunday, March 15, 2020, after a long, enduring fight with brain cancer. He was 59 years old. He was born on Oct. 1, 1960, to William R. and Doris S. Lambert, of Wauchula, and is survived by his loving wife of 34 years, Eileen Metheny Lambert; three sons, Ryan (Kaylee Bell), Grayson (Kaylee Brummett), of Wauchula, and Carter Lambert, of Exmore, Va.; mother, Doris S. Lambert, of Wauchula; brother, Bill Lambert (Marie); sister, Lynn Bennett (Randy); one brother-in-law, Andy Metheny, and sister-in-law, Cynthia Farrington (Charles). In addition to the immediate family he was loved by five nephews, Robb Bennett, Ron Bennett, Will Lambert, Chris Farrington and Camden Metheny; four nieces, Susan Brown, Alisa Norris (Jonathan), Cheryl Farrington and Katie Metheny; and many other aunts, uncles and cousins. Ken was raised in a Christian home with a strong background in faith. He was very involved in his home church, First Baptist Church of Wauchula, as deacon, teacher and choir member. He sang at numerous weddings, funerals, political events and holiday programs as a member of a men’s quartet, choir member, and soloist. Professionally he was a graduate of Hardee High School (1978), South Florida State College AA (1980) and as a true and faithful GATOR at the University of Florida where he was in Florida Blue Key Honorary Fraternity and Sigma Phi Epsilon Fraternity (1983). His career included ownership as a broker/partner with his mother (Doris) at Lambert Realty in Wauchula, numerous positions with large regional banks such as Atlantic Bank and First Union Bank and eventually a distinguished career with Harte-Hanks as an advertising executive. Additionally, he was managing member of Summit 105 LLC and he and his wife owned Cooper’s Wayside Flowers in Wauchula for many years. As a community servant, Ken was extremely active in politics as a member of the local Republican Party, former Mayor of Wauchula and currently a City Commissioner for most of the last two decades. He was on the District Board of Trustees of South Florida State College, including having served in the position of Chairman. He spent his time on earth living a full robust life prioritized by serving his God, providing for and nurturing his family and by loving his Community, County and Country. A memorial service will be held at First Baptist Church of Wauchula, 1570 W Main Street, on Friday, March 20 at 10 a.m. with the Rev. Joe Butler, and Deacons Marcus Shackelford and Doyle Carlton III presiding. Live-streaming to be announced by family or via the First Baptist Church of Wauchula. Expressions of comfort may be made at robartsfh.com. Robarts Family FUNERAL HOME WAUCHULA Provided as a courtesy of Robarts Family Funeral Home

Kenneth (Ken or Kenny) Allen Lambert passed away peacefully at his home on Sunday, March 15, 2020, after a long, enduring fight with brain cancer. He was 59 years old. He was born on Oct. 1, 1960, to William R. and Doris S. Lambert, of Wauchula,... View Obituary & Service Information

The family of Kenneth Allen Lambert created this Life Tributes page to make it easy to share your memories.

Kenneth (Ken or Kenny) Allen Lambert passed away peacefully at...

Send flowers to the Lambert family.