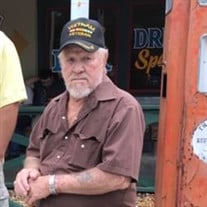 Larry Paul Eures, 70, of Wauchula, Florida passed away on Friday, November 15, 2019 in Tampa, Florida. He was born in Hardee County, Florida on March 5, 1949 and was a lifelong area resident. He served in the United States Army and was employed... View Obituary & Service Information

The family of Larry Paul Eures created this Life Tributes page to make it easy to share your memories.

Larry Paul Eures, 70, of Wauchula, Florida passed away on Friday,...

Send flowers to the Eures family.