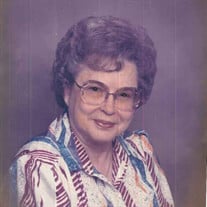 Martha Lorraine (Ballard) Martin-Elems, 91, of Wauchula, passed away on Tuesday, April 11, 2017 at Good Shepherd Hospice House in Sebring. She was born August 12, 1925 in Ona, Florida. She was preceded in death by her parents, Ira Richard Ballard and Annie Merle (Evers) Ballard; brothers, Delmar Ballard, Ira Merle Ballard, Cecil Maurice Ballard, Mabry W. Ballard, and Robert "Tiny" M. Ballard; and one sister, Carolyn (Ballard) Loudermilk. Martha married Eugene Logan Martin on December 29, 1944, making her a war bride. They were married for 48 years, with Eugene passing away June 10, 1992. Much of the earlier years were spent living in different parts of the country as Eugene was in the United States Air Force until the early sixties. After retirement from the military they first settled in Bowling Green, Florida and then in Wauchula in 1966. On February 3, 1995 she married Howard E. Elems of Wauchula. During this time she and Howard spent much of their time in the mountains with old friends from Hardee County. Howard passed away on October 15, 2006. Martha spent the majority of her life taking care of her family, with only short periods of work outside the home. She worked in two different dress shops, filled in as a substitute teacher, and with Loren Yetter at the elections office. She loved maintaining a beautiful and comfortable home for her family, cooking, sewing, reading, and spending time with her grandchildren and then her great-grandchildren. Martha is survived by two sons,Kenneth L. Martin (Barbara) of Lakeland, Dale E. Martin (Totsie) of Wauchula; one daughter, Deborah A. Scheipsmeier (Carl) of Wauchula; eight grandchildren, Timothy Martin (Jennifer) of Chicago, Heather Martin Staley (Darrell) of Utah, Anthony Scheipsmeier (Erica) and Michael Scheipsmeier (Stephanie) of Wauchula, Toni Martin Lauters (Robert) of Auburndale, Jason Martin of Texas, Kathern Martin Rose (Glenn) of Valrico, and Victoria Martin Culbertson (Michael) of Wimauma. Great-grandchildren are Madison, Carter, Taylor, and Aliza Staley; Alexandria, Sarina, Korissa, Sophia, and TJ Martin; Austin and Alexia Scheipsmeier; Aubrey and JD Scheipsmeier; Zoe and Joseph Lauters; Michael, Mackenzie and Maddox Rose; and Gemma and Memphis Culbertson. As well as many nieces and nephews and Great nieces and nephews Visitation is Wednesday, April 19, 2017 at Robarts Garden Chapel, beginning at 10:00 AM. Funeral Services will follow at 11:00 AM. There will be no graveside service. A luncheon will be held at The Church of Jesus Christ of Latter-Day Saints on Hanchey Road in Wauchula immediately following services.

Martha Lorraine (Ballard) Martin-Elems, 91, of Wauchula, passed away on Tuesday, April 11, 2017 at Good Shepherd Hospice House in Sebring. She was born August 12, 1925 in Ona, Florida. She was preceded in death by her parents, Ira Richard... View Obituary & Service Information

The family of Martha Lorraine (Ballard) Martin-Elems created this Life Tributes page to make it easy to share your memories.

Send flowers to the Martin-Elems family.