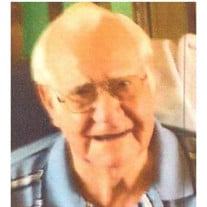 Martin Raymond, Jr., 86, of Ona, Florida passed away in Lakeland, Florida on Saturday, June 20, 2020. He was born in Winchendon, Massachusetts on October 15, 1933. Martin had been a resident of Florida since 1989, coming from Gardner, Massachusetts.... View Obituary & Service Information

The family of Martin Ernest Raymond Jr. created this Life Tributes page to make it easy to share your memories.

Send flowers to the Raymond family.