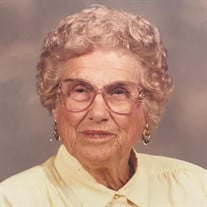 Mrs. Opal Scarborough Knight, age 102, died on January 1, 2021, peacefully in her home of seventy-one years in Wauchula, Fl. Mrs. Knight was born on October 7, 1918 in the Midway Community, which is West of the Crewsville Community in Southeastern Hardee County. She was born in her home to her parents Will and Ruby Scarborough. Growing up during the depression era Mrs. Knight could relate stories about how hard life was then. She said her family never went hungry because they had chickens, milk cows and a garden. They would slaughter beef for their meat and trade the rest out for groceries at local stores. One thing she would say over and over was, “there was no money”. During her grammar school years, she attended Zolfo Elementary. She said one day she went out to recess without her hat. Her daddy always thought girls should wear a hat outside. She went back and got her har just as she was going out her parents rode by so she didn’t get in trouble. After graduating from Wauchula High School, as it was called back then, She, attended Florida State University when it was an all-girls school and Florida Southern in Lakeland. Marrying her high school Sweetheart in 1941 the couple lived Wauchula. When WWII broke out Doyle enlisted in the Navy and Mrs. Knight worked in the post office at the Sebring Airbase. During her lifetime Mrs. Knight traveled extensively. She went to many foreign countries plus places in the United States. When asked what her favorite place was, she said St. Thomas in the Virgin Islands “It was the most beautiful”. Mrs. Knight was a lifelong member of the First Baptist Church of Wauchula. She served as a Sunday School teacher, a member of the W.M.U. and loved going to her Sunday School class, Mary Martha. Mrs. Knight also taught school a number of years at Bowling Green Elementary. She was also Very active in the Women’s Club where she served as president and was a member for many years. After her Husbands death in 1972 she was appointed to the school board to replace him and later ran on to serve for twelve years. She also worked at the supervisors of Election Office and the Clerk of Court’s office. One of her favorite activities was being a member of her bowling league. Also, a member of a singing group called the Classy Lassy’s, they would travel to neighboring counties to sing. Mrs. Knight manages her cattle ranch and groves for many years. She would spend the greater part of a day riding through her cattle and was very knowledgeable of them. Nuni as her grandchildren and great grandchildren called her as well as their many friends, is survived by her daughters Carol Stone, and Martha (Royce) Tyson. Her grandchildren Julie Stone, Doyle (Jill) Tyson, Will (Kim) Tyson. Great grandchildren Matt Tyson, Macy Tyson, Mady Tyson, Braden Tyson, Brooklyn Tyson and Lucy Stone. Along with several nephews and nieces. Mrs. Knight is preceded in death by her husband Doyle Knight, grandson Daniel Stone, parents Will and Ruby Scarborough and brother W.J. Scarborough. The family would like to thank all of the caregivers that cared for Mrs. Knight during the last several years. Also, her Sunday School Class for the many treats they would bring her. A graveside service will be held Thursday, January 7,2021 at the Wauchula Cemetery. The family will arrive at 10:30 for a visitation. In Lieu of flowers the family asks that you give to your favorite charity.

Mrs. Opal Scarborough Knight, age 102, died on January 1, 2021, peacefully in her home of seventy-one years in Wauchula, Fl. Mrs. Knight was born on October 7, 1918 in the Midway Community, which is West of the Crewsville Community in Southeastern... View Obituary & Service Information

The family of Opal Scarborough Knight created this Life Tributes page to make it easy to share your memories.

Send flowers to the Knight family.