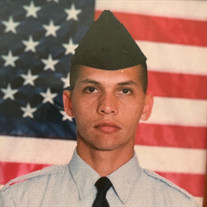 TSgt. Paul Carter Weaver, USAF, 46, finished life’s journey on December 2, 2020. Paul was born on July 16, 1974 in Mobile, Alabama to the late Leo Carter Weaver and Eva (Sanchez) Weaver. As a child his family moved around often finally settling in Wauchula, Florida. He was born into a loving close family. His mother always had activities for him and siblings, and it was during his childhood that he gained an appreciation for arts and music. Even as an adult he still enjoyed joking and laughing with his siblings. He attended Wauchula High School where he played football and graduated in 1993. Following graduation, he moved to Tampa to attend Tampa Technical Institute for graphic arts. He moved back to Wauchula where he met Santa Maria Herrera. What attracted them to each other first started off as a friendship blossomed into a loving relationship. He joined the United States Air Force in 2000, and went to Lackland Air Force Base in San Antonio, Texas. He then was stationed at Dyess Air Force Base in Abilene in 2001. After life led both of them to Texas they connected again and were married on November 24, 2001. Together they embarked on a new journey as a military family, that was complete after welcoming their son Brandon in 2003. He served in Qatar and did two tours in Diego Garcia. In 2009 he was stationed in Las Vegas before separating from active duty and moving back to Abilene in 2014 to continue his military service as active reserve. He was honorably discharged in 2014 to begin his studying for a career in I.T. in 2015. He was currently employed with Aero Simulation, Inc. his dream career began. Paul enjoyed spending time with his family and making sure his wife was happy. He cherished their relationship and remembered all the important dates in their lives. He and his son enjoyed gaming together and sharing their love for computers. He was a loyal friend and often his concern for others overrode himself. He loved people and going out to have a good time and going anywhere Wolf Pack Karaoke went. His love of singing and music came from his father who also did Karaoke a lot. He was a huge movie and music buff. His love for music was heard by all. His love for television and movies was shared with anyone who would listen to him talk about his latest show, movie or music he has found. His passing leaves a void in the lives of his family friends. But memories of special times shared will sustain his family and friends for years to come. He was preceded in death by his father, Leo Carter Weaver; paternal grandparents, Lora Christian& Leo Weaver Sr., maternal grandpa, Jose Pablo Sanchez, sister, Agustina Loranne Weaver, half-brothers, Norman Chambliss and Michael Scott Clark. He leaves to carry on his legacy his wife, Santa Maria Weaver; son, Brandon Weaver; mother, Eva Weaver; brother, George Weaver; sister, Tina Weaver; grandmother, Maria Agustina Sanchez; special puppy’s Jasmine, Ariel, and Max; numerous loving aunts, uncles, cousins, and so many special friends that enriched his life. A visitation and funeral services were held in Texas. There will be a visitation Wednesday, December 16, 2020 from 6:00 pm to 8:00 pm in the Robarts Garden Chapel. Funeral Services will be held on Thursday, December 17, 2020 in the Robarts Garden Chapel at 11:00 am. Interment with Military Honors will follow in the Wauchula Cemetery.

The family of Paul Carter Weaver created this Life Tributes page to make it easy to share your memories.

Send flowers to the Weaver family.