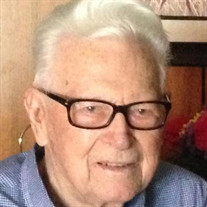 Robert Lane Metheny, 96, of Wauchula, Florida, passed away at his home on March 30, 2021. He had been a resident of Hardee County for the past 46 years. He was born on December 20, 1924, in a family home on Metheny Road in Wauchula on properties dating from 1913. He grew up in Wauchula and graduated from Frostproof High School as class valedictorian. He served in the United States Army and fought in the D-Day invasion at the Battle of Normandy. After his service, he earned a degree in Business Administration from the University of Florida, graduating in the class of 1948. While he was in college, he met Marjorie Clark on a blind date. It was at a dance for the boys from the all-men's University of Florida in Gainesville and the visiting girls from Tallahassee’s all-women's Florida State University. She was forever the love of his life. They married in 1950 and had, three children, three grandchildren and four great grandchildren. Upon graduation, Robert started his career as a Special Agent in the Intelligence Division of the Internal Revenue Service. His career took him to Miami, Tampa, Orlando and Jacksonville. He retired from a senior management position, in 1976. After which, he returned to Wauchula and took over the family orange groves and cattle pastures. After Marjorie retired from here career as a schoolteacher, she and Robert traveled extensively in Europe, the Caribbean, Canada, and the United States. He was a wonderful man who loved his family and devoted his life to them. We miss him terribly and feel incredibly blessed to have had him in our lives for as long as we did. He is survived by two daughters, Karen Lea Warfel (Richard) of Apollo Beach, FL, Bobbie Lynn Skukowski (William), of Winter Haven, FL, one son, Kevin Edward (Debbie) of Lithia, FL, three grandchildren, Meghan Harrison (Eric), Seth Metheny (Erin), and Shelby Skukowski, and four great grandchildren, Houston, Haven, Cooper and Kennedy. A memorial service will be held on Saturday, April 24, 2021, at First United Methodist Church in Wauchula, Florida at 11:00 a.m. with visitation for friends and family from 10:00 to 11:00 a.m. After the service, a reception with a light lunch will be held at the family home at 543 Metheny Road, Wauchula. In lieu of flowers the family would like donations made to Cornerstonehospice.org. Expressions of comfort may be made at robartsfh.com

Robert Lane Metheny, 96, of Wauchula, Florida, passed away at his home on March 30, 2021. He had been a resident of Hardee County for the past 46 years. He was born on December 20, 1924, in a family home on Metheny Road in Wauchula on properties... View Obituary & Service Information

The family of Robert Lane Metheny created this Life Tributes page to make it easy to share your memories.

Robert Lane Metheny, 96, of Wauchula, Florida, passed away at...

Send flowers to the Metheny family.