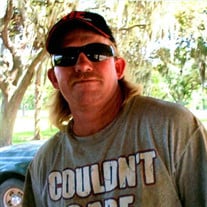 Roger S. Darty, 54, of Wauchula, passed away at his home on Wednesday, January 9, 2019. Roger was born in Bartow, FL on September 2, 1964 and had been a Hardee County resident most of his life. He was Pentecostal by faith and was employed... View Obituary & Service Information

The family of Roger Sylvester Darty created this Life Tributes page to make it easy to share your memories.

Send flowers to the Darty family.