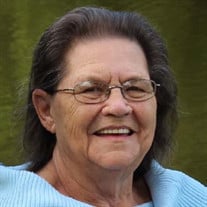 Sandra Cooper Graham, 73, of Wauchula, FL, passed away peacefully at home with her loving family and friends, by her side, on Saturday, January 21, 2017, after a brief battle with lung cancer. A Life Celebration Service will be held on Saturday January 28, 2017 at 2:00 PM with a viewing starting at 1:00 PM at the Chapel of Robarts Family Funeral Home in Wauchula, FL. An only child, Sandy was born to the late Clyde Cooper and Martha (Sawyer) Cooper in St. Petersburg, FL on November 20, 1943. After attending Pasco High School in Dade City, FL, she married the love of her life, CW Graham. They enjoyed 54 years of marriage and were devoted parents to three children and lots of “adopted” children of whom filled their lives with laughter and love. Sandy was a true matriarch for her family and a proud homemaker who was well known for her coveted banana pudding that will be missed by all. For 6 years, she was a daily volunteer and PTA member at Bardmoor Elementary School in Seminole, FL. Sandy had many passions throughout her life, always putting her family first. She was an avid reader, loved being “in the woods”, and enjoyed fishing, casino slots, crocheting and sewing. She could be spotted playing on her phone or tablet, and was a gamer before gaming was cool! She was happiest when she was spending time with her family and friends. Sandy is survived by daughter and fiancé, Tessa Graham and Robert Myers of Zolfo Springs, FL; son and daughter-in-law, Robert and Myriee’ Graham of Canton, GA; grandchildren, Lucas and Jacob Graham of Canton, GA; numerous “adopted” family, nieces and nephews, and other family and friends. Sandy was preceded in death by husband, Carlos “CW” Graham and son, Richard Dale Graham. In lieu of flowers, the family humbly asks for memorial donations to help with funeral expenses. Donations can be made at any Wauchula State Bank branch to the Sandra Graham Memorial Fund or can be made online at www.gofundme.com/sandragraham.

Sandra Cooper Graham, 73, of Wauchula, FL, passed away peacefully at home with her loving family and friends, by her side, on Saturday, January 21, 2017, after a brief battle with lung cancer. A Life Celebration Service will be held on Saturday... View Obituary & Service Information

The family of Sandra Graham created this Life Tributes page to make it easy to share your memories.

Send flowers to the Graham family.