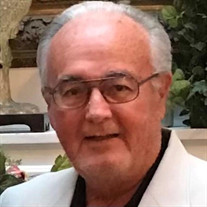 Spencer Decker, 83, a resident of Winter Haven since June 13, 2021, coming from Wauchula, Florida passed away on Friday, September 3, 2021, at Winter Haven Hospital. he was born in Detroit, Michigan on August 13, 1938. Spencer attended Florida’s First Assembly of God of Wauchula, Florida. He worked as a medical transport driver for MTI and also held the title of Minister. He was not only a man of God, as he proudly served our country as a member of the Airforce. He was a talented singer in the group The Trust Quartet before joining the Silver Tones God Trio. Spencer was married for 13 weeks before passing. He is preceded in death by his parents; Father William Harvey Decker, and Mother Verna Decker, Brothers; Lonard Decker, Cletith Decker, Randal Decker, Harvey Decker, Iris Decker, Douglas Decker, and Ira Decker; and first wife, Karen Decker. Spencer is survived by his Wife; Sylvia Holton Galloway Decker, Sons; Darren Decker (Diana) of Jacksonville, FL, Armond Decker (Cindy) of Charlotte, NC, and Leroy Decker of Hartford, CI. Brother; Jim Decker. Daughters; Leslie Albritton (Ralton) of Wauchula, FL, and Alaine Hallam (Rob) of Anchor Point, AL. Spencer is also survived by his many grandchildren of 10 and great-grandchildren of 11. A memorial service will be held at a later date.

The family of Spencer Decker created this Life Tributes page to make it easy to share your memories.

Send flowers to the Decker family.