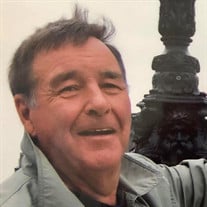 On November 17, 2021, Stanley Allen Godfrey, loving husband and father, passed away at age 83 in Sebring, Florida. Stanley was born near Portage La Prairie, Manitoba, Canada on July 6, 1938. He moved to the United States, where he traveled the country working as a pipefitter and power plant superintendent before settling in Temperance, Michigan. When he retired, he fulfilled his lifelong dream of buying a farm in Alberta—complete with cows, chickens, pigs, and a horse—before moving to Florida for warmer weather, where he met his devoted wife Arloa. After their wedding on June 4, 2016, Stanley and Arloa embarked on a memorable honeymoon driving across the U.S. and Canada. Stanley was known for his quick wit and playful sense of humor, always keeping those around him laughing. He was a proud father to his daughter Jean, traveling to observe her first oral argument in Chicago and boasting to her opponent afterwards. He obtained his pilot’s license and enjoyed flying, playing cards, watching Jeopardy, and working on home improvement projects. Stanley had a compassionate spirit and was an active member of his church, First United Methodist of Zolfo Springs. Further details will be provided regarding an upcoming memorial service. Stanley was preceded in death by his parents Margaret and Clarence, sister Jean, brother Charles, brother-in-law Ken, and late wife Cathy. He is survived by his wife Arloa Godfrey; daughter Jean Godfrey; sister Susan Edie; sister Lois Carpenter (Leo); stepchildren Toni Forrer (Tom), Bill Coffell (Brigitte), Cindy Carlton, and Don Coffell (Christine); and several nieces, nephews, step-grandchildren, and step-great-grandchildren. A Memorial Service will be held Sunday, December 5, 2021, at 2:00 pm at First United Methodist Church of Zolfo Springs. In lieu of flowers, a donation to the church would be appreciated.

On November 17, 2021, Stanley Allen Godfrey, loving husband and father, passed away at age 83 in Sebring, Florida. Stanley was born near Portage La Prairie, Manitoba, Canada on July 6, 1938. He moved to the United States, where he traveled... View Obituary & Service Information

The family of Stanley Allen Godfrey created this Life Tributes page to make it easy to share your memories.

Send flowers to the Godfrey family.