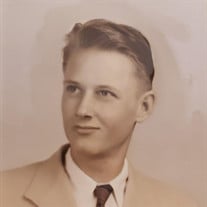 Thomas Clark Braddock, 93, of Wauchula, passed from this life at his home October 12, 2019. He was born September 9, 1926 in Tampa, Florida to parents Alton Richard and Gladys D. Braddock. He is survived by his wife Charlotte Ann Constant Braddock, Sister Mary Jean Braddock Ruelf, children and spouses James (Loraine) Alton Braddock, Constance (Bud) Marie Braddock Abbott, Ruth Ann Braddock and daughter-in-law Patty Crews Braddock wife of eldest son Grayson V. Braddock (deceased). Grandchildren Daniel Braddock, Stephanie (Braddock) Carbajal, Jeremy Braddock, Nathaniel Braddock, Anna (Braddock) Dickey, Jessica (Johns) Knight, Ashlee (Abbott) Harrison, (16) great grandchildren, (1) great, great grandchild. Though living his 93 years in Florida never more than 200 miles from his birthplace, Tom traveled the world with his wife and family members as tourists, guests of missionaries and missionary helpers. Tom’s most cherished travel experiences left footprints and sawdust in Africa, Romania, Australia, New Zealand, Vanuatu, Japan, Peru, Costa Rica, Honduras and Mexico. He traveled and served in the US from East Coast to West Coast stopping for two-week intervals at dozens of locations in between, building pews, pulpits, communion tables and working on electrical wiring, roofs, trusses as he supported churches and their missionaries in construction of buildings. On a mission trip in Zimbabwe with a doctor friend from Bradenton, Tom helped deliver babies while reviving an oxygen machine needed in a rural 40-bed clinic. He used his amazing-God given talents to meet many project challenges with a piece of wood or metal. As they traveled they made friends and built relationships that will last for an eternity. Tom Braddock left a legacy to be remembered, as well as lighting the path for those still on the earth, to present the Gospel with the talents that the Lord has bestowed upon us. Whether it be abroad or in his hometown, Tom Braddock was an example of being the hands and feet of Jesus. Funeral services will be held on Thursday, October 17, 2019 at Riverview Heights Missionary Baptist Church at 3:00 PM with Pastors Jim Harris and Jim Hankins officiating. Visitation is from 1:30-3 PM. Burial is in Oak Grove Cemetery, Wauchula.

Thomas Clark Braddock, 93, of Wauchula, passed from this life at his home October 12, 2019. He was born September 9, 1926 in Tampa, Florida to parents Alton Richard and Gladys D. Braddock. He is survived by his wife Charlotte Ann Constant... View Obituary & Service Information

The family of Thomas Clark Braddock created this Life Tributes page to make it easy to share your memories.

Thomas Clark Braddock, 93, of Wauchula, passed from this life...

Send flowers to the Braddock family.