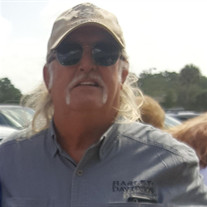 Wendell Herbert Stewart, 66, of Bowling Green, FL, passed away in Sebring on Saturday, June 24, 2017. He was born on July 20, 1950 in Fort Smith, Arkansas. Wendell came to Hardee county in 1966 coming from Gideon, Missouri. He worked as a supervisor... View Obituary & Service Information

The family of Wendell Herbert Stewart created this Life Tributes page to make it easy to share your memories.

Send flowers to the Stewart family.