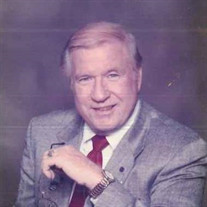 William "Billy" O. Grimsley, 79, of Winter Haven, died on Saturday, November 18, 2017 at his home. He was born in Wauchula on March 7, 1938. He graduated from Hardee High School in 1956 and Florida State University in 1961. Billy was a combat bird-dog pilot in Vietnam flying over 100 combat missions looking for enemy ground troops, so that our Army could effectively "seek and destroy" enemy positions. He was overseas approximately one year and was awarded the Air Medal and several Vietnam Medals. He was discharged as a U.S. Army Captain in 1967; he also served eight years in the Army National Guard. Billy was a partner in the Tedder and Grimsley CPA firm in Lakeland. He was a member of the First Baptist Church of Winter Haven, served as a deacon and Sunday school teacher for around 38 years, and received an Emeritus Award for faithfulness and service to his church. He served as president of the Kiwanis club in 1984 and was awarded the Legion of Honor certificate for 30 years of perfect attendance. He served on many committees and was on the board of directors for Christian Day School in Winter Haven. Survivors include his wife, Jo Ann Grimsley of Winter Haven; 2 daughters, Kimberly Ann Grimsley Stoker of Keller, Texas, and Susan Michelle Chapman and husband David of Wauchula; 1 brother, Robert "Bob" Grimsley of Fayetteville, North Carolina; 4 grandchildren, Kristen Taylor Carter, Cameron Stoker, Matthew Tyler Chapman, and Mark David Chapman; 3 great-grandchildren, Eston Luke Chapman, Eva Grace Chapman, and Austin Chapman; and many nephews and nieces. Funeral services will be held at 10:30 AM on Tuesday, November 21, 2017 at the First Baptist Church of Winter Haven, with visitation held one hour prior. Dr. Steve Harness will officiate. Interment with Military Honors will be at Wauchula Cemetery.

The family of William "Billy" O. Grimsley created this Life Tributes page to make it easy to share your memories.

Send flowers to the Grimsley family.